Douglas Crawford is Britain’s number one downhill skier. He currently holds the British Champion title in Downhill, Super-G and Super Combined and the overall title. He’s been racing all over the world this season but I managed to catch up with him to find out how fast he’s skiing, what Sochi meant to him and what he thinks about Meribel.

You’ve come a very long way in your skiing career but where did it all start?

I first skied with my parents when I was 2. I think it was in the mountains in Scotland. After that I skied a lot on the dry slope at my local club Bearsden and up North in Scotland.

How many years have you been in training for?

I’ve been training full time for 10 years now! But I started training and focussing on skiing long before then.

Meribel hosts the British Alpine Ski Championships. How many years have you come to Meribel?

I think 10! 2004 was my first, though I have missed a couple through injuries.

What’s the best part about coming to Meribel for the Champs?

Meribel is a place I know really well and a fun, friendly town. The race hill is great and I normally ski well there so that helps! It’s also nice to catch up with all the other British racers who you hardly see all year.

It’s already March and the season is flying by. Where have you been this year?

I’ve been all over the place; we trained in Italy and Chile in the summer. Then we were in Canada and America for the start of the World Cup tour and Nor-am races. Since then all over Europe- Austria, Switzerland, France, Italy, Norway and next up is Andorra!

After your amazing results in Kope last season, where you made your way into the top 60 in the world in Downhill, what were this seasons goals?

The number one goal was to qualify for the Olympics. The Olympics is the pinnacle and what I’ve wanted forever. Sadly I didn’t make it and now I have had to re-assess and set some new goals.

This season is very important as it is hosting the Winter Olympics in Sochi. Everyone in the skiing world was amazed that you weren’t selected to represent Britain at the Games. What was the process behind the selection?

BSS decided to make the criteria much tougher to meet to ensure that the athletes they sent produced ‘credible’ performances. It was tough for me as they cut all the support from the downhill athletes at the same time as setting the bar much higher. That made it pretty tough.

BSS say that your first Olympics should allow you to gain experience as you have a higher chance of medalling in your second or third Olympics. Many athletes, yourself included, have been denied this experience. Do you feel that Britain made the right decision in making the Criteria so strict?

I find it hard to see the benefits of making the criteria that much tougher. It was pretty sad for British ski racing to only have representation in 3 of the 10 alpine events despite having athletes who could have produced good results.

Looking to the future are you aiming for the Seoul Winter Games in 2018? What’s your plan of action?

Right now 2018 seems a long way off! I am focussing on the World Cup and Europa Cup tours and getting to the 2015 World Championships. I have several ideas of what I need to change about myself and my programme in order to succeed in the future.

What’s been your best race to date?

I had a great 8th place in a Europa Cup in Sarntal. I would say my best skiing was probably in Wengen World Cup, but I didn’t manage to keep it going all the way to the finish.

This year the toughest thing about the races has generally been the conditions rather than the hills. We seem to have had bad snow and a lot of fog which has made things difficult. Madonna in Italy particularly was really tough; a steep top section was made a lot, lot tougher by brutal bumps, flat light and fog.

Thanks for your time Dougie and all the best for the rest of the season!

Dougie will be racing in Meribel in a few weeks for the French Championships between 18th and 22nd of March. His next appearance in Meribel will be for the British Championships from the 30th of March until the 7th of April.
If you’re around in Meribel come to the Chaudanne to show your support for Britain’s best!

Dougie would like to thank the following sponsors for having helped him get this far in his skiing career:

To find out everything you need to know about Dougie check out his website: Dougiecrawford.com

Ad
Ad
Got a Meribel Question? 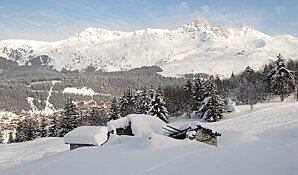